by Sylvia Adamson (University of Sheffield)

It is with great sadness that the Society has received news of the death of Matti Rissanen, Professor Emeritus of English Philology at the University of Helsinki, at the age of 80 on 24 January 2018. 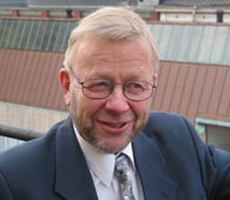 A long-time member and supporter of the Philological Society, Matti Rissanen was a pioneer in English historical corpus linguistics, and the director of the project that produced the Helsinki Corpus of English Texts, which covers a thousand years of the history of English and has been used widely since its publication in 1991.

Matti Rissanen was one of the rare scholars to command the history of the English language from its early stages to the present, beginning with his PhD thesis (1967) on the Old English numeral ONE. His wide range of publications includes a number of original articles and several co-edited volumes of corpus-based research, such as Early English in the Computer Age (1993), English in Transition and Grammaticalization at Work (1997), as well as the much cited chapter on ‘Early Modern English syntax’ in The Cambridge History of the English Language (vol. 3, 1999). Also taking an active interest in early American English, he was one of the international team that re-edited the Records of the Salem Witch-Hunt (2009).

His retirement in 2001 did not mark an end to his research activities. His philological expertise made an important contribution to the publication project that resulted in a new Finnish translation of all Shakespeare’s works. One of his long-lasting research interests was the history of English connectives, on which he was working to the very last days of his life.

Active in numerous professional organizations, Matti Rissanen served as president of the Societas Linguistica Europaea and chaired the Board of the International Computer Archive of Modern and Medieval English (ICAME). He was the founder and first director of the Research Unit for Variation, Contacts and Change in English (VARIENG), an Academy of Finland Centre of Excellence from 2000 to 2011. He was also a driving force in the foundation of the Finnish Institute in London and the Language Centre of the University of Helsinki. In recognition of his achievements Matti Rissanen received many awards, including an honorary doctorate of the University of Uppsala, Sweden, and being elected to the Finnish Academy of Science and Letters. He was an Honorary member of the Modern Language Society, the International Society of Anglo-Saxonists, and the Japan Association for English Corpus Studies.

On the personal level, Matti was supervisor to several generations of undergraduate and doctoral students in Helsinki, while providing unfailing encouragement and support to many more students and colleagues both in Finland and abroad. He will be greatly missed by his wide circle of friends.

Anyone who would like to share their memories and recollections of him is invited to do so by adding them as comments (in English or Finnish) to this VARIENG blog post.

This notice has been adapted, with permission, from the notice posted by Matti’s colleagues in Helsinki.

This site uses Akismet to reduce spam. Learn how your comment data is processed.