by Mary Coghill (Institute of English Studies, University of London)

I am arranging a conference on the work of the Russian Linguist and philologist, Yuri Rozhdestvensky (1926-1999), Professor at Moscow State Lomonosov University.

Russian Evolution: Russian Reflections
A Conference on the work of Yuri Rozhdestvensky: Diachronic Philology and his Contribution to Narratology in poetics

The conference is to be held at The Institute of English Studies, Senate House, University of London 21st October 2017.  Further details and booking facilities are available on the conference website, and also on the poster.

My own conference presentation is entitled:

Rozhdestvensky and the ‘image of the author’ explored with reference to his book General Philology (1996, Moscow)

I would welcome any answers to the above and please do come to the conference; you can contact me at Mary.Coghill[at]sas.ac.uk .

by John Lowe (University of Oxford)

I was fortunate enough to receive a PhilSoc Masters Bursary in 2015/16, which has been of greater value to me than the £4000 awarded. It enabled me to study for an MPhil in Theoretical and Applied Linguistics at my institution of choice, the University of Cambridge. I’m happy to say it was worth it!  So before I get down to writing about my experiences of postgraduate study and research, I want to thank PhilSoc for their generosity and for seeing value in that hopeful letter of application penned in early Spring 2015.

First I’ll say a bit about my general experience and then I’ll get down to the linguistic meat. Cambridge is a weird and wonderful place. It is like stepping into a time machine and stepping out in 1870 where everyone has a MacBook. It is a bubble, as everyone says; the real world seems distant and at times one can feel claustrophobic. However, the bubble is good for doing research. It is quiet, there are talks almost every day and there was always the possibility of valuable academic discussion with my peers and seniors in the department, from whom I learnt a great deal.  Like any University, but perhaps especially, there is also the constant opportunity to have your assumptions about everything and anything challenged by those who know better, or at least pretend to do so. The Masters Bursary allowed me not only to learn some serious linguistics, but also to acquire the ability to power a very unstable boat with a very long stick. All in all, I learnt a great deal. I can now say with some confidence that I understand enough syntax to understand what people are disagreeing about most of the time, but not to always understand why they insist on disagreeing.

In my bursary application I said I wanted to specialise in diachronic morphosyntax in Germanic and I specifically “promised” to look at exaptive changes in language (my thanks to George Walkden whose support and lectures got me thinking about these things). In short, Lass (1990, 1997) said that when form-to-function mappings are eroded in language, we can be left with functionless linguistic “junk” which can then be co-opted for an unrelated function. The canonical example from Lass (1990) is the recycling of afrikaans gender marking from Dutch syntactic agreement marking for gender and definiteness (1a,b) to conditioning by the morphological character of the adjective itself (1c,d): simple vs complex.   I found Lass’ ideas interesting and I knew that David Willis in Cambridge had been working on this topic, so I was keen to get in on the action (for lack of a better term). Once arrived, he was always ready to challenge my ideas and encourage me to refine my arguments.

Scholars have argued about exaptation for 25 years; so I will admit now that I approach this problem from a minimalist perspective. That means: I focus on Child Language Acquisition as the primary locus of morphosyntactic change, I reject junk, i.e. functionless material as impossible (like many but not all), and crucially my work assumes that the syntactic architecture is based on a hierarchical generation of formal features and projecting heads, and so on and so on….

This type of change is especially interesting because, in my mind, it shows the incredible capacity of the child acquiring language to regularise seemingly incoherent data. Research into exaptive reanalyses can tell us something about how humans can make good data from bad data.

So what is bad data? Well “junk” doesn’t work if we assume that every utterance is somehow a representation of linguistic units stored in the lexicon – or whatever we call it. Sadly,  I don’t have the space elaborate on all past approaches (see Vincent 1995; Willis 2010, 2016; Lass 1997, and Van de Velde & Norde 2016 for a review), but my hypothesis can be summed up as follows: breakdown in language can, over time, render structures increasingly difficult to acquire; this can reach a point where the target structure—dare I say parameter—is no longer acquirable from the input. The child is faced with the choice of losing the structure or finding any other possible analysis. What’s the difference between this and any other reanalysis, I hear you ask. Well, one standard view is that reanalysis works on the basis of ambiguity between possible analyses; so if there are two or more possible analyses, the child is more likely to choose the simpler one (2a). If the more economical analysis were not found, the original would still be available from the input. I argue that for exaptation what we instead find is that the original analysis is removed completely for the acquirer (2b). Therefore, any new analysis does not rely on ambiguity between the target and other analyses, as the target just doesn’t factor for the child making sense of the input. 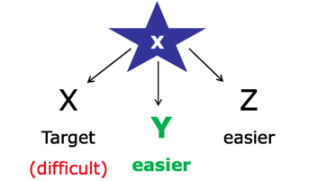 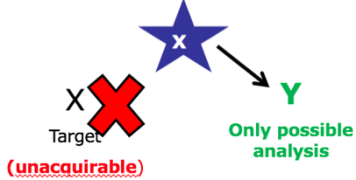 I have tried to test this for syntax alone, whereas past work focused more on morphosyntax. The questions I am trying to answer is: how pervasive is exaptive reanalysis and what strategies do children use to find analyses when they can’t draw on strategies of economy. To these ends, I am looking for explanations orthogonal to Universal Grammar. My MPhil thesis research on the collapse of V2 and its reanalysis as Locative Inversion in Early Modern English involving the actuation of locative formal features, e.g. out of the woods came the bear, seems to suggest that phonologically silent syntactic heads might be especially vulnerable to this kind of change, as their acquisition is purely dictated by overt syntax (3a,b: trees for those who like them – click on the “Read more” button). Metaphorically speaking, we knew Pluto was there before we could see it because we could see things orbiting it. Syntax works similarly, the only difference is that if we change an orbit we change the planet, or rather syntactic head, too.  I am pursuing these ideas with larger case studies as part of my PhD project at the Humboldt University in Berlin, where I am now part of Artemis Alexiadou’s  research group.  I am also trying to see how grammar competition, language contact and exaptive reanalysis might go hand in hand in certain situations.

END_OF_DOCUMENT_TOKEN_TO_BE_REPLACED

This paper presents an overview of negation in Colonial Valley Zapotec (CVZ) based on a corpus of texts written in Valley Zapotec between 1565 and 1808. There are four negative markers in CVZ, two bound (ya=, qui=) and two free (aca, yaca). Standard negation employs a negative word and an optional clitic, =ti. Understanding the syntax of a historical form of Valley Zapotec allows us to make some observations about related forms in modern Valley Zapotec languages, in particular San Lucas Quiaviní Zapotec (SLQZ). For example, the morpheme =ti, which is required in clausal negation in SLQZ, is not obligatory in any negative constructions in CVZ until around 1800. In Vellon 1808, the youngest text in the corpus, we observe =ti required in one type of clausal negation. This allows us to observe details of the development of the modern Valley Zapotec negation system, including the fact that the remaining changes leading to obligatory =ti in clausal negation in SLQZ must have occurred within the last 200 years.

Periodization, translation, prescription and the emergence of Classical French

by Wendy Ayres-Bennett (University of Cambridge) and Philippe Caron

In this article we demonstrate how fine-grained analysis of salient features of linguistic change over a relatively short, but significant period can help refine our notions of periodization. As our case study, we consider whether it is appropriate to distinguish a period called français préclassique (‘Pre-Classical French’), and if so, what its temporal limits are. As our contemporary informants we take, on the one hand, the comments of writers of remarks on the French language, who were highly conscious of language change, and on the other, usage in successive French translations of the same Latin source text which can be exploited to track and date the adoption of ‘modern’ linguistic variants. We find atypical patterns of change – and notably changes which move rapidly through Labov’s different stages – that contribute to the sense of discontinuity or periodization. However, this sense of ‘rupture’ does not coincide with the chronological boundaries hitherto suggested for français préclassique, thus throwing the validity of this period into question.

by Martin Maiden (University of Oxford)

The historical causes of general so-called ‘opening’ diphthongization of proto-Romance low mid vowels in stressed open syllables are an enduring matter of dispute in historical Romance phonology, the two principal positions being that the diphthongs originate in the assimilatory process of metaphony conditioned by following unstressed vowels, or that they are a matter of ‘spontaneous’ diphthongization associated with lengthening of the vowels. Most recent scholarship on the subject has tended to favour the latter view. This study, focusing on Tuscan (and thereby on Italian), reasserts the case for the former interpretation, critically reviewing older arguments and adducing new ones to show that the details of Tuscan open syllable diphtongization are significantly correlated with a metaphonic origin, despite claims to the contrary. In particular, I argue that the restriction of the generalized diphthongs to open syllables reflects the early conditions of metaphony, and that the occasional absence of the diphthongs in Tuscan systematically presupposes the historical absence of a metaphonizing environment. In conclusion, I reflect on the significance of my claims both for general Romance historical morphology and, particularly, for the place of Tuscan among the Italo-Romance dialects. The data also show how morphological analogy may play a significant role in the diffusion of the effects of sound change.

Axial parts, phi-features and degrammaticalization: the Case of Italian presso/pressi in diachrony

In this paper, I will provide a possible syntactic characterization of (a subset) of so-called degrammaticalization processes, based on the case of the diachronic evolution of presso/pressi (near/at, in) in Italian. Moreover, with an empirical study on the Opera del Vocabolario Italiano (OVI) corpus, I will support Svenonius’s idea of Axial Part as an independent category in the lexicon (and not a mere spatial subset of relational nouns), providing a new kind of evidence i.e. of the diachronic type, to this claim.